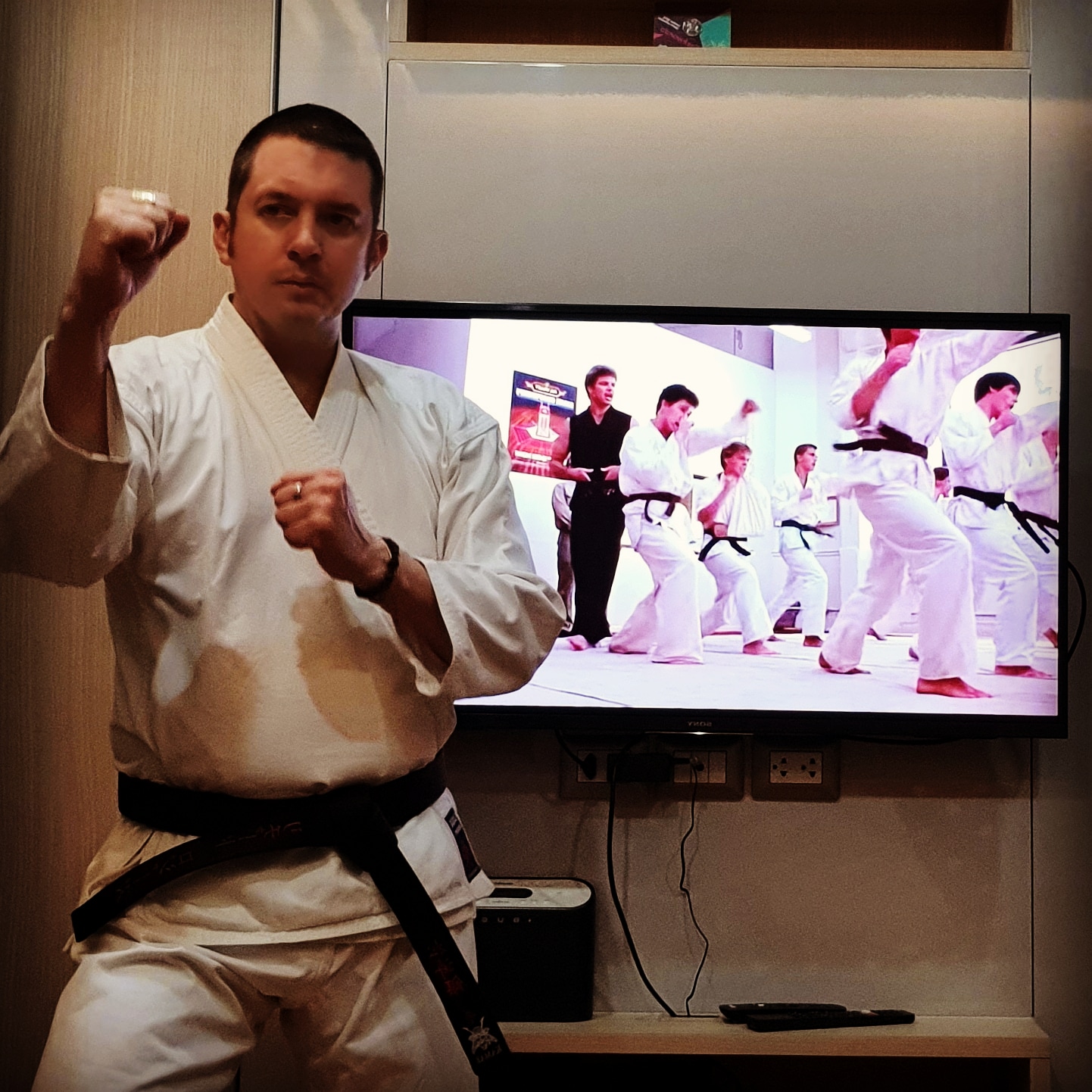 When I look back on the most significant, powerful and transformative moments in my life, few can come close to when I first walked into a Shotokan Karate dojo.

I was a weak, somewhat weird, high-energy 11-year-old. My dad had started going to Karate lessons and wanted to take me along too. I honestly had no idea how much it would change my life.

I had watched Daniel Larusso’s epic stories in the original Karate Kid series as a small child. Sometimes I would try and copy the moves, making loud ‘Hiiii-Yaaaaaaa’ noises, which usually triggered a fight with my younger brother, and a subsequent ‘grounding’ from mum. I was hooked from an early age, and attending my first Karate class with my dad at age 11 (in 1994) was also like re-living the Karate Kid fantasies I had as a 5-year-old.

Now, with the massive popularity of the Cobra Kai Netflix series (I’m a big fan too, I’ll admit), Karate is seeing a long-awaited resurgence in interest, albeit misinformed (perhaps). As an experienced Karateka I watch Cobra Kai with much amusement: the students make progress way too quickly (performing advanced moves like spin kicks and spin sweeps after seemingly only a few months training); the big school fight is exciting, but unrealistic (it’s unlikely that on-duty teachers would allow that to happen) and parents would be kicking up a massive fuss if kids were coming home battered and bloodied from the Cobra Kai dojo (there’s one scene in Season 3, for example, in which Eli “Hawk” Moskowitz takes another kid to the ground and repeatedly punches him in the head, MMA style, until he’s very bloodied. John Kreese smiles, doesn’t intervene, and when the pounding has finished he says words to the effect of “Will someone pick him up?” In real-life, parents and probably the police would have intervened and the dojo may have been temporarily closed.).

My karate lessons were (and are) exciting, fast-paced and painful. I and the other white belts had to do lots of stretching, hold fixed stances for long periods of time, perform basic movements (kihon) with power and aggression and perform well in sparring (kumite). There were no mats on the floor and we didn’t wear pads or gumshields – this was old school, traditional Karate, done on hardwood school-gym floors. We respected each other, and aggression was always controlled. If things ever got out of hand (which rarely happened), it was seen as a moment of shame and embarrassment. And as for Karate competency – it takes years and years to get ‘good’ at Karate, even with daily training. Real karate isn’t like Cobra Kai (sorry).

When I first started Karate my body was uncoordinated and unconditioned. After around one month, however, I was performing techniques with some accuracy, had made friends at the club (and later, within the larger Shotokan community as a whole) and was seeing some (albeit minimal) progress. And that’s what I believe initiated the other changes I saw in my life: seeing the progress I made.

27 years later and I’m still training daily. Shotokan Karate has given me so much to be grateful for, including:

Are there any countries or schools where martial arts training is compulsory for students?

Yes! Tai Chi is a compulsory course at Zhenbao primary school in Jioozuo in Central China, for example. The aims are to strengthen students’ physiques and to promote Traditional Chinese culture.

This school, however, is the only example I am aware of. If you know of any others, then please do feel free to comment in the comments’ box at the bottom of this page.

Have people advocated for compulsory martial arts classes in schools before?

Many celebrities, politicians and former athletes have called for compulsory martial arts classes in schools in the past:

Bibliography and references (in order of appearance)

Have a great week of teaching everyone! Don’t forget to comment below or contact me if you have any questions or comments – your feedback is my lifeblood!

One thought on “Cobra Kai in Schools: Should Martial Arts be Compulsory for Kids?”